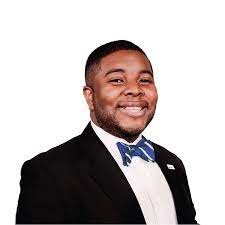 Qu’ Derrick R. Covington serves as the DEI Program Director of the Florida Institute of Oceanography (FIO), working with FIO consortia to promote diversity among Florida’s vibrant ocean and coastal ecosystems and economies. Qu’Derrick holds a bachelor’s degree from Fayetteville State University; in spring 2015, he became a member of Alpha Phi Alpha Fraternity Inc., where he served on the fraternity’s national board of directors as the 59th Southern Region Assistant Vice President. Mr. Covington then went on to continue his education at Florida Agricultural and Mechanical University (FAMU) where he graduated with his Master of Science degree while also holding a degree in Christian Ministry from More Than Conquerors College in Charlotte, N.C. He now attends Howard University pursuing a Ph.D. in Higher Education Leadership and Policy.

Qu’Derrick develops and implements diversity, equity, and inclusion (DEI) initiatives, within the organization to advance diversity and inclusion in ocean science with underrepresented communities such as HBCUs and MSIs as core values and critical components of the organization’s culture. He is responsible for creating, managing, and optimizing all efforts to make the workplace fairer and more equitable for all FIO stakeholders. In 2019, Qu’Derrick founded The Tulsa Initiative Inc., a digital mentoring platform that uplifts and motivates while inspiring generations to impact and serve their communities. Mr. Covington has been featured in Black Male Ph.D.’s, Howard University’s Bison Beat, and The Academy of Preachers, to name a few. In 2016, He was invited to our nation’s capital by Congresswoman Marcia L. Fudge to discuss voting rights and other important issues facing today’s youth.